The book is out! "@Play: Exploring Roguelike Games"

One of the reasons @Play has been slow lately is because I've been focusing my efforts on a ebook compilation of columns, with a few new pieces as well and a couple of extras thrown in too.... 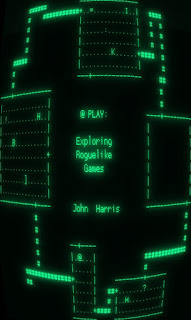 At the moment it's an exclusive in the current gaming StoryBundle Mega Game Bundle as one of the bonus items ($12 minimum), but after that closes it'll be going up on sale at itch.io and Amazon.

By the way!  Everything else in the bundle is at least awesome.  My poor book's got some frankly amazing company, like David Hellman and Tevis Thompson's game criticism/adventure graphic novel Second Quest, the always excellent Hardcore Gaming 101's book of Strider and Bionic Commando, The Kobold Guide To Board Game Design, Matthew Kumar's Exp. Negativs, Videogames For Humans, Boss Fight Book's epic investigation into the impact of Shadow of the Colossus... oh, and a little thing called The Untold History of Japanese Game Developers, Volumes 1 and 2.  I'm a huge geek about obscure games and gaming, and that one sounds like a real treasure trove.

I hope I don't sound too publicity-minded when I suggest that it's an excellent way to get a lot of wonderful, what's the word?  "Content?"  Yeah, I hate calling things "content."  It's so generic.  Everyone worked so hard on their items in this bundle.  This is blood and sweat we're talking about here, in electronic form.  I hope you enjoy them.

Tomorrow I'm going to post one of the new articles here and on the Gamasutra blog as the next @Play.  I think the article after that one will be an entirely new piece on Quarries of Scred.  Then, hopefully, it'll be business as usual.  See you then.
Posted by Rodneylives at 12:09 AM

The first ebook collection of @Play is out on itch.io and Amazon! Over 700 pages and nearly 70 columns both classic and new, all for just $9.99! If you want to contribute or donate to the sustenance of the column (like, oh, enabling me to review more console roguelikes), I get 90% of the purchase price of the itch.io versions, and you get the book in Kindle, EPUB and PDF formats!

Sorry it's not out in print, but I assure you, the resulting volume would be huge....